It was half-term break for our son this last week and so my husband decided to take some time off from work as well to spend time together and finish our long list of things to do before the end of the year.

We decided to spend the day in nearby Cadiz, our first family outing with both our six-year old son, our 3 1/2 week-old baby girl and the nanny. After breakfast, we loaded up the car and left for the two-hour drive via Algeciras and Tarifa.
The day started out cloudy and it started to rain by the time we reached Sotogrande and all throughout the winding, coastal road to Tarifa. Luckily, by the time we reached Cadiz, the skies had cleared.
Cadiz is considered to be the oldest Western city and is famous for it’s location between the coasts of Europe and Africa. It’s location on the Atlantic ocean makes it an important port town with a large harbour for cruise ships stopping over on their Mediterranean route.
We reached the center of town at Plaza San Agustin around noon and parked our car there and headed off to one of the many pedestrian streets that spread out from the main square. We had a quick look around the square and up one of the pedestrian shopping streets before we ended up on Calle Veedor where we found two tapas bars across each other, both owned by the same people. The first is a typical tapas bar with a grocery/deli counter and the other a modern place called El 10 de Veedor with a long, sleek wooden tapas bar and a separate restaurant alongside it.

Tapas from El 10 de Veedor
As there were two little children with us, we put off going to the traditional tapas bar because it would have been too difficult to sit on the rickety bar stools so we ended up at the modern El 10 de Veedor. Initially, the place had promise as the waitstaff were very friendly and agreed to serve us despite the fact that we were there way earlier than the typical 2:00 p.m. lunch crowd. We ordered a variety of tapas and waited eagerly for our food to arrive. The first plate of fried ortiguilla de mar (sea anemone) was tasty – similar to deep-fried oysters in flavour but to snails in texture. A plate of jamon Iberico followed which was very good as well. It went downhill from there when we were served the rest of our tapas – secreto Iberico en salsa garrapiñada (Iberian pork in a candied nut sauce), chorizo and gambas al ajillo (shrimp in oilve oil and garlic). The pork was tasty enough but very oily, the chorizos were nothing special but the shrimps were terrible – frozen, tasteless baby shrimp floating in garlicky olive oil.
After our disappointing lunch, we took a long walk towards the La Viña part of town nearer the sea where the yearly Cadiz carnival takes place. We had a chnace to explore the small side streets and see a bit of town. On our walk, we saw El Faro, one of Cadiz’s famous restaurants and Casa Manteca, a local bar frequented by matadors (bullfighters). 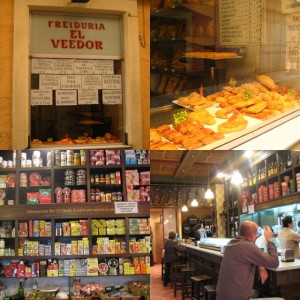 We should have eaten at one of the city’s famous freidurias (fry shops) where fresh fish or seafood are coated in batter and deep-fried then served in paper cones. It’s the Spanish version of fish’n chips and would have been a tastier lunch than what we had or we should have stopped for a few tapas at the neighborhood bar frequented by matadors (bullfighters), Casa Manteca in the La Viña area where we would have had a real taste of Cadiz. Well, maybe next time.