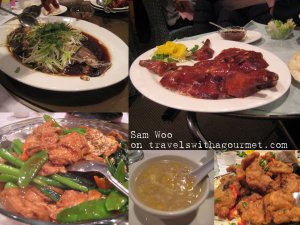 After a long day at Legoland, we were all too lazy to cook dinner and ended up making a booking at a large Chinese restaurant in Irvine, about twenty minutes away from Laguna Beach. As soon as we walked in to Sam Woo, we knew we were going to have a good dinner.
The place was packed with Chinese families sitting at large round tables enjoying their meal and it was a good thing we booked because there were no empty tables left and there were loads of people waiting at the front still waiting to be seated.
Nothing can duplicate the atmosphere of an authentic Chinese restaurant – the almost unbearable noise levels that kill any kind of conversation, the tight spaces between tables where waiters weave in and out with large trays of steaming hot platters, the brusqueness and briskness of the service which is all part of the charm. In any case, these kinds of restaurants are all about the food and not about the ambiance and the noise and mess is what you have to endure to have a good meal.
The menu is extensive with live seafood as their specialty so it took us awhile to decide which dishes to order. We started off with some sweet corn and chicken soup, not the usual hot and sour that we order since we were with kids. This was followed by a whole Peking Duck – make sure that you specify you want pancakes, like we did or it will be served with steamed white buns instead. Both arrived quickly – the soup sweetened by the corn and chunkny with chicken pieces. The duck came out on a trolley and was carved and rolled into pancakes with hoisin sauce, slivers of scallions and cucumbers. It’s been ages since we’ve had Peking duck, one of the disadvantages of living in Spain where authentic Chinese food is just impossible to have.
Next came the steamed whole flounder with ginger and scallion – the fish was fresh and sweet and the soy sauce and sesame oil complemented it perfectly. Pork chops in salt and pepper, deep-fried crispy shredded beef (off the menu but I requested it anyway for my son), stir-fried greens with bean curd in oyster sauce and some fried rice were all served afterwards. The food was excellent and when the bill came, typical to Chinese restaurants, it was written out in Chinese characters so we didn’t have a list of what we ordered but it didn’t matter since the total price was so reasonable (about $10 per person) that we didn’t even try to check it. I wonder when we’ll have another Chinese meal this good next?
_________________________________
Sam Woo
15333 Culver Drive, Ste. 720
Irvine, CA 92604
Tel: +1 949 262 0688
(*another location on 4215 Spring Mountain Rd. Las Vegas, NV 89102)