Waking up to a view like the one above is incredible and in Laguna Beach that’s what you get every morning. When the fog burns off at midday, it gets even clearer and Catalina island appears over the horizon.

This was my second Laguna Beach visit and each time I come, I realize that southern California might be a place I could move to and never leave. The weather is similar to what we have in Marbella – sunny days all year round, the proximity of the beach and the fantastic food available. Here are a few other things about Laguna Beach that I didn’t have time to do full posts on this time around but are worth a visit.

Ramos House Cafe – for scrumptious breakfasts in a quaint open-air restaurant alongside the railroad track. Sack-covered tables, water served in jam jars and California-cuisine inspired dishes make this a favourite among locals. Get there early if you want a table quick. It’s best to do breakfast or brunch during the week when it’s not that crowded and there’s no rush to give up your table. The sweet potato fries are to die for.
Ramos House Cafe
31752 Los Rios Street, San Juan Capistrano, CA 92675
Phone: +1 949 443 1342

Taco Loco – A cliche surfer hangout, this taqueria joint serves up modern Mexican fare that can be enjoyed on Paul Frank designer stools or for to-go. The blackened fish tacos I had here were better than those I had at the Border Grill. Lots of vegetarian options as well. During the day, expect laid-back service from surfer dudes so don’t go if you’re in a rush.
Taco Loco
640 S Coast Hwy # 1Laguna Beach, CA 92651
Phone: + 1 949 497 1635 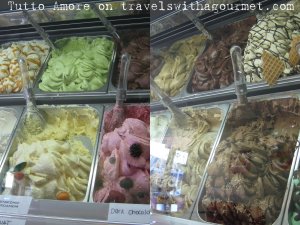 Tutto Amore – new kid on the block gelateria with the best espressos and cappuccinos (hands down) in Laguna Beach. Traditional flavours are yummy but don’t miss out on their daily specials or gourmet flavours like Ferrero Rocher, root beer float and almond roca plus experimental ones like durian and ginger. Most work but some are as strange as they sound. The coconut gelato I had was delicious with freshly grated coconut flakes in every bite.
Tutto Amore
247 Broadway StreetLaguna Beach, California
Phone: +1 949 715 9249