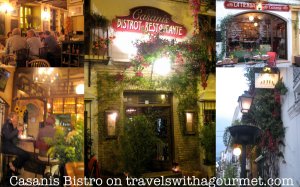 There’s nothing better than walking into a restaurant buzzing with atmosphere and packed with a crowd enjoying themselves.  This is often difficult to find in a seasonal town like Marbella where some months are so slow that restaurants often stay closed for the winter except for a few places in Marbella that have survived the years with a regular clientele of locals, weekenders and foreigners and Casanis is one of them.

Casanis is a small homey bistro located in the Marbella’s casco antiguo (old town).  Right by the entry is a bar and further on is  small courtyard with a few tables on the a mezzanine floor. The main restaurant consists of a large red leather banquette (bench) that lines the walls and where a dozen tables are set.
We first ate here two years ago and had a good meal then somehow forgot about it until yesterday when it was mentioned in a conversation with a couple of French mums at a children’s birthday party. As we were hankering for a meal somewhere “new” or at least somewhere we hadn’t been to many times, we booked a table there yesterday night.
Arriving slightly late for our 8:30 booking and were surprised to find the restaurant half-full with the first seating of early diners.   Aperitifs were offered, menus were set down and specials were recited.  While we were deciding what to have, a basket of fresh bread and salted butter were served.  After making sure that my husband and I had decided on different items so we could taste each other’s food, we placed our orders and asked for a carafe of Rioja. 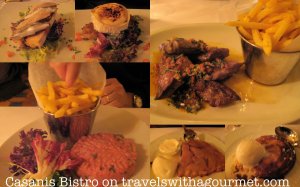 Both my choices were from the daily blackboard specials while A chose from the regular menu. I started with the bruschetta of boquerones en vinagre (vinegar-cured fresh anchovies) on a toasted slice of bread with roasted red and green peppers which came with a few greens.  The anchovies were mouth-puckeringly sour and complemented by the sweetness of the roasted peppers.   A’s copious salad with goat’s cheese was as it should be – a warm chunk of creamy cheese over greens with a hint of honey in the dressing.
Our table was right by the entrance so we watched as more than a dozen people were refused a table since they hadn’t reserved.  Even before our appetizers arrived, the restaurant was already packed with just one table for four right beside us that was also reserved.  More people were still streaming in without reservations and it was already 10 p.m.  To seat a few of them, they had set up a few more tables at their delicatessen and wine shop right across the restaurant.
By this time we were enjoying the ambiance so much that we didn’t mind the slightly longer wait for the main courses.  Steak tartare for A with frites (bien sur) and a grilled Presa Iberica (a pork-loin like cut from the famous flavourful acorn-fed pigs of the region) which should have been served with a baked potato but I asked for french fries instead.  The tartare was good but lacked a bit of zing that was fixed with lots of freshly-ground pepper and Tabasco.  The presa, on the other hand, was delicious – crisp on the outside but soft  inside and served with a tangy homemade chimichurri (the typical Argentine sauce of oil, vinegar and herbs to accompany grilled meat).  I thought I wouldn’t be able to finish the four chunks of meat but A helped and we somehow polished it off.
We were going to forgo desserts but in the end succumbed to a Tarte Tatin for A and the special banana crepe flambe for me.  Both were generously served with homemade vanilla ice cream (a rarity in Spain where for some strange reason plain vanilla ice cream isn’t available in the supermarket and even Haagen-Dazs only sell it at their special counters).  The desserts and the ice cream were very good but we just couldn’t finish them and even skipped the coffees and asked for the bill straightaway as the table beside us had just arrived and were smoking non-stop.  We needed to step outside for some fresh air and walk off the big dinner we just had.
Leaving the restaurant close to midnight, we meandered in and out the tiny cobble-stoned alleyways of the Casco Antiguo to make our way back to the car.  A lovely diner a deux in a convivial atmosphere that made us realize that there is some night life in Marbella’s old town. We definitely won’t wait another two years to come back to Casanis for simple delicious food in a lively setting.
______________________
Casanis Bistro
Calle Ancha, 8
Casco Antiguo, Marbella 29600
Tel: +34 952 900 450
Open daily for dinner from 6:00 till late
Closed on Sundays
* Casanis also has a delicatessen with specialty food products and a separate wine shop just across the restaurant