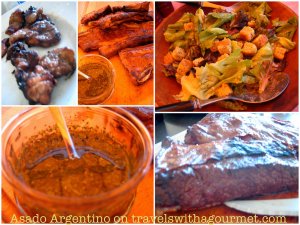 Last weekend, we continued with our grill theme and looked for the Argentine butcher that a friend had spoken of. We finally found the place tucked away in a quiet corner near the Supersol supermarket on one of the side streets off the main plaza in San Pedro. The place was packed for a Saturday morning. As we waited in line for our turn, we noticed two good things: first, there was an Argentine buying some meat ahead of us and second, that the two butchers working behind the counter were Argentine as well
We were looking forward to finding out which Argentine cuts of meat were available. There was chorizo criollo which don’t have paprika like the Spanish chorizo and also have more meat and less fat and morcilla (blood sausage). We didn’t see any more Argentine cuts displayed and we asked if they had tira de asado (short-ribs) and they pulled out a large piece from their back freezer. When we asked for entraña (skirt steak), they also had it in their back freezer. I guess the trick is to ask since most of the Argentine meat cuts are stored away in the back. In the end we bought entraña (skirt steak), a morcilla, two chorizos criollos, 2 strips of asado de tira (short ribs) and some mollejas (sweetbreads). They also had dried chimichurri – the special sauce served with grilled meats, mate – traditional Argentine herbal tea and aji – dried chili and even the special pastry used to make empanadas (meat-filled pies). 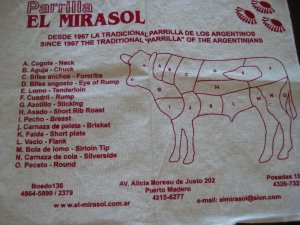 After our successful butcher expedition, we headed straight home and got the grill hot and decided what we were going to have for lunch and which for dinner. We mixed some chimichurri and made a salad then we had the chorizo, morcilla and asado de tira for lunch with some bread to make delicious choripan – freshly grilled chorizo sandwiched in between two pieces of baguette. For dinner we then had the rest of the meat – entraña with the rest of the chimichurri and mollejas, sliced thinly with lemon juice. After a full-on Argentine asado lunch and dinner, we’re off meat for at least a week or until our next visit to the Argentine butcher which will probably be soon.
* Thought I’d add on that photo of the different Argentine meat cuts. The place mat was a gift from the restaurant El Mirasol.
*This might help explain the meat cuts better – I found a website that talks about Argentine cuisine called Asado Argentina.