Our first meal in London was supposed to be at Yauatcha, Alan Yau’s funky dimsum restaurant so we hopped into a cab and went straight to Broadwick Street in Soho. When we arrived, we were surprised to find a very quiet restaurant and were greeted by the not-so-friendly hostess who informed us that only the tearoom was open while the restaurant kitchen was undergoing renovations.
Since we were quite hungry, we walked around to try and find another restaurant. At the end of the road was Wardour street where there was a Busaba, another Alan Yau creation, which was on my list of restaurants for lunch the next day.
Walking into Busaba’s modern interiors was a pleasure. The restaurant was filled with square tables, benches and large pendant lamps over each table focusing on the three bottles of essential sauces in Thai cooking – Sriracha hot sauce, soy sauce and Squid brand fish sauce. We were seated at a corner of the large table making it much easier to have a conversation during the meal instead of being seated side-by-side on the long bench. Each place was set with a simple brown paper mat in the same color as the wood of the table and some chopsticks (although Thais don’t eat using chopsticks but forks and spoons, which we were given later on).

The menu is divided into: salad, soup noodle, wok noodle, stir-fry, grill, rice, curry and side dishes. We wanted to try several dishes and just share them all. From the wok noodle, we had the Sen chan pad Thai (a twist on the usual Thai rice noodle dish because of the addition of crab meat and green mango). From the stir-fry section, we had rose-apple and chicken stir-fry, a side dish of Chinese broccoli with garlic and shiitake mushrooms and coconut rice. All the food arrived quickly piping hot and served in simple white crockery. The vegetables were crisp and not overcooked, the stir-fried chicken was sweet from the fruit with a hint of spice and the coconut rice was delicious but the best dish was the pad Thai which was a large portion of rice noodles with prawns and crab meat, crushed peanuts, egg and the tangy twist from the slices of green mango – an excellent Thai flavor combination of sweet-sour-salty and spicy. We were pleasantly surprised with the bill which came to £15 each for n excellent lunch. 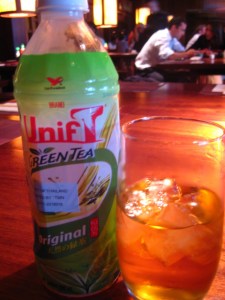 The next day, we were supposed to meet up with another friend, C, for lunch at the Busaba on Bird Street near our hotel. Instead of going to another restaurant, we decided to eat there again since we had such a delicious lunch the day before. This time since there were three of us, we were able to order more dishes from the menu and just place them all in the middle and share them all. We tried the pat prik king prawn (stir-fried prawns with snake bean, lime leaf, ginger and red curry), the char-grilled duck in tamarind sauce with Chinese broccoli, a side dish of Thai calamari with ginger and peppercorn, a non-noodle Mai sai-sen pad Thai made only with Chines chive, tofu, bean sprouts, egg, peanut and lime plus our favorites from the day before: the Sen chan Pad Thai, Chinese broccoli with garlic and shiitake mushrooms and coconut rice. We also tried the Unif iced green tea which was very refreshing and a nice alternative to fizzy drinks or regular iced tea. 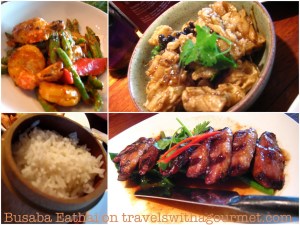 As usual, the food arrived quickly and piping hot – the new dishes we tried were all very good: the prik king prawns were spicy, the grilled duck was sour-sweet from the tamarind marinade, the squid, crisp and hot with the whole black peppercorns and the non-noodle pad Thai an unusual yet delicious option for vegetarians. Everything else was exactly as they were the day before with the crabmeat and green mango Mai sai-sen pad Thai again standing out for its’ original flavor combination. We thought we would never be able to finish all that food but we somehow managed to eat every last morsel which was useful as we needed the energy for our afternoon of retail therapy. Again, the bill was very reasonable at £20 each, excellent quality-price ratio.
We hit the shops on Oxford street all afternoon starting at Selfridges stationery department and food hall then heading off to M&S, Russell and Bromley, Mothercare and back again to Selfridges women’s fashion and shoe floor where we spent a few hours escaping the heat and trying tons of Christian Louboutins, LK Bennett’s and Havaianas. It was a perfect girl’s day of lunch, shopping and catching up on gossip.
__________________
Busaba
106-110 Wardour St.
London W1
+44 020 7255 8686
* perfect for hanging out in Soho
8-13 Bird St.
London W1
+44 020 7518 8080
* great for shopping on Oxford Street
another on:
22 Store St., London WC1
+44 020 7299 7900
Open daily, all-day long.
Monday-Thursday 12 noon to 11 p.m.
Friday-Saturday 12 noon to 11:30 p.m.
Sunday 12 noon to 10:00 p.m.