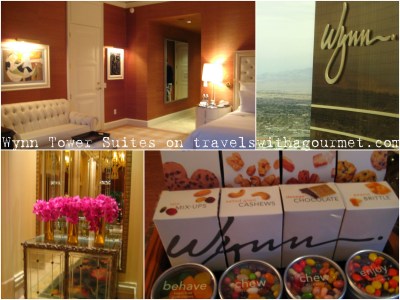 After three days of mind-boggling jet lag and a half-day trip to nearby Lee Canyon for our eight year old’s first ski lesson, we decided to check-in at the Wynn for an evening a deux at one of the hotel’s Tower Suites . We were pleasantly surprised to be given a room on the 60th floor overlooking the lights of the strip and the snow-capped mountains in the distance.
The tower suite room was large and well-furnished.  It was the first time that I actually liked the carpet pattern  – no colorful swirly patterns or flowers but a discreet beige, white and brown plaid which matched the furniture.  I especially liked the comfortable white two-seater Chesterfield sofa and the designer amenities and mini-bar snacks.   After freshening up and resting a bit, we made a reservation SW Steakhouse for the only table we could have at 8:00 p.m.  We arrived half an hour earlier and the place was packed with a crowd near the entrance and at the bar waiting to be seated.  We were told to have a drink at the bar while they got our table ready.  Soon after, we were led to a banquette table towards the far end of the room where other couples were seated.

Menus were presented and another round of drinks was offered which we refused as we hadn’t even finished the first round which we had carried over to our table. The menu at SW is all about the steak so after a quick peek, we decided quickly on sticking to their specialty.  A starter each – crab soup for A and an iceberg salad for me.  We both couldn’t resist having their Nebraskan Corn Fed 100% USDA Prime beef –  the 16-ounce NY strip steak (incidentally, the smallest steak on the menu was a 9 or 12 ounce filet mignon which I find the most boring cut of meat because of the absence of marbled fat).  While we waited, a basket of warm bread was brought over with a slab of butter topped with black sea salt.  The place kept getting busier and as soon as a table was cleared, another group would sit down.  The noise levels were high and between the loud conversations, the restaurants’ buzz and the every half-hour light and sound show outside, it was almost impossible to have a proper conversation.
Our appetizers were brought over – A’s tomato-based soup was topped with a puff pastry crust and filled with chunks of crab while my iceberg salad wasn’t quite what I thought it would be.  It was a large chunk of ice-cold iceberg lettuce stuffed, not topped, with crushed Roquefort, not the dressing that was described on the menu.  I tried my best to fork my way through the goo but couldn’t really enjoy the makeshift greens and cheese.  When they cleared our plates, they never asked why my salad was messed up but not eaten.  I guess they were in a rush to serve us our main courses. (Also, the glass of pinot noir I ordered was never brought and given only after I had asked for it twice.)
The steaks arrived on oval platters and were served with the our order of truffled creamed corn and SW fries.  The portion of the side dishes were generous – the truffled creamed corn in a cocotte and the fries filled a large paper cone.  Three sauces were also served on the side – Béarnaise, Jalapeño Tropical Fruit, SW Original.  As we were both going to have the Béarnaise, I decided to try the other two, out of curiosity – the SW original was ketchupey and the green Jalapeño one was sweetly spicy – both were fine but not something I would eat my steak with.  The side dishes were very good – the creamed corn was sweet and earthy with the addition of the truffles but the fries were a disappointment.  They were overly crispy and tasted reheated so we hardly ate any.  Good thing that the meat was delicious –  tender but seared on the outside and crusted with the salt and pepper they used to season it – otherwise the meal would have been mediocre.  A finished his steak but I struggled to get through the almost half-kilo of beef although I tried my best.  At this point, we opted to skip dessert and end our dinner by taking a walk around the Wynn for more people-watching.
Although the steaks were delicious, dinner at SW was nothing special and the rushed and half-hearted service was unexpected in a restaurant at the Wynn.  If they get their appetizers and sides right and make their staff more attentive then it would have been a perfect steakhouse meal.
___________________
SW Steakhouse
Wynn Las Vegas
+1 702 248 3463