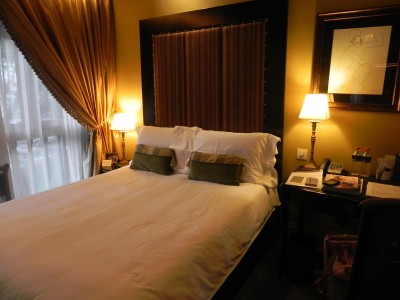 I spent two days in Singapore last week to do some errands.  I had searched in vain for a hotel on Orchard road and since I couldn’t find a reasonably-priced room in that part of town, I tried this boutique hotel, The Scarlet, just off Ann Siang Hill road and close to Chinatown.  Where leaving Bali was a bit of a nightmare with the endless queues at the airport, arrival in Singapore was a breeze.  Immigration went quickly and soon after my flight landed, I was in a cab on my way to the hotel.
The Scarlet is on Erskine road and occupies most of the corner building which was originally a brothel, hence the name.  The original shop house facade has been preserved complete with red shutters on all the windows.  Interiors are similar to that of a boudoir – lots of velvet, silk and dark colors everywhere.  After checking-in I crossed the nearby parking lot and headed to the Maxwell Food Centre, one of Singapore’s oldest ones, where I had a Hainan Chicken rice and a lime juice for less than US$5.

I walked around the area afterwards – from Erskine road where the hotel was, up to Ann Siang Hill road then left towards Club Street passing by restored facades and having a look inside the many restaurants and fun little boutiques that now line the road.  The facades of the shop houses were colorful and it was really nice to see that they were kept as they were.  Some of the places were still not renovated so the mix of shabby and restored shopfronts was interesting as well.
Worth a look are the following – this little bookstore – Books Actually – with a hand-picked selection of books and gorgeous postcards and notebooks, an all-white modern coffee bar cum art space – Shots on Ann Siang Hill  and a tiny takeaway pastry shop – The Patissier.  Further up the road is one of the first ones who opened a restaurant in the area and my sister’s favorite – L’Angelus, a tiny French bistro. I really enjoyed staying in this area and seeing a side of Singapore I had never seen before.
P.D. 22 September 2011
A kind reader just let me know that Books Actually have moved to Tiong Bahru and their previous premises is now a shop with a tiny cafe.  Also, a new PS Cafe has opened in the area that is exclusively for adults and teenagers (no kids, strollers and the mummy coffee crowd).  Don’t say you weren’t warned.