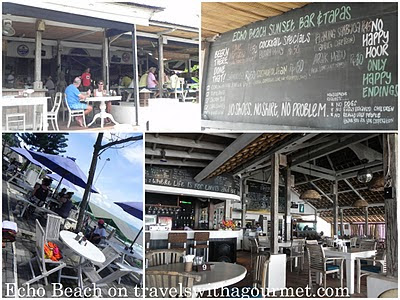 Another Sunday lunch, another beach.  We had heard so much about Canggu’s surf area.  Last weekend, we decided to finally drive to Echo Beach and see what all the fuss was about.  We took the route that goes through Batu Belig, past the Canggu club then got lost with the twists and turns and arriving at a dead-end road that led to the sea but wasn’t what we were looking for.  Finally, after finding our way back to the main road, we continued onwards following the signs to Tanah Lot and then the blue signs to Sea Sentosa which led us to the right place.
After parking the car, we walked down the small boardwalk where several restaurants were lined up facing the shore.   We continued to the end and found a table at the The Beach House.  The place wasn’t packed but there was a pretty good crowd of mostly families having lunch and enjoying the view.  Their menu is varied and have organic salads, sandwiches, tapas, grilled seafood, pizzas plus Indonesian and western fare.  The atmosphere is casual with white-washed chairs and tables all set up in a large open-air wooden house overlooking the crashing surf.  We ordered an organic green salad to share then a vegetable panini for A and the grilled spareribs and fries for me with two very cold lime squashes.  The portions were good and the food not bad.  I can imagine what it’s like at sunset where I hear the place is packed with people watching for the sunset while perched at the front bar.  The Beach House’s motto is Hard to Find, Hard to Forget which is apt as the place still has a chic rough-edge to it, neither too sophisticated like Seminyak nor grungy like Kuta.  I can imagine that when the high-end apartments of Sea Sentosa are up though, the atmosphere at Echo Beach will change so while it’s still the way it is, try and get there.
________________________________
The Beach House
Echo Beach, Canggu
(follow the signs to Sea Sentosa)
Tel: +62 361 747 4604 or 780 3436
*Open daily from breakfast till late with a seafood BBQ every night.