On our first day in Bangkok, we set off right after breakfast and took a taxi straight to the Grand Palace.  After a half hour ride, we were dropped off in front of the main entrance and were about to queue up for tickets when we were told that the palace was closed for a Buddhist ceremony and would only reopen at 1:30 p.m.  As it was only 11:30, we were at a loss as to what to do when an enterprising (or so we thought) tuktuk driver offered to take us to another minor temple that was open then bring us back to the grand palace right on time for when they open to the public.  It seemed like a good idea and offered a chance to ride a tuktuk, a motorized rickshaw that is typical transportation in Bangkok.  We agreed on a price of 20 Thai Baht (less than US$1) for the ride.  We set off and weaved in and out of traffic and were deposited in front of a nondescript entrance and told to have a look while he waited for us in the parking lot. 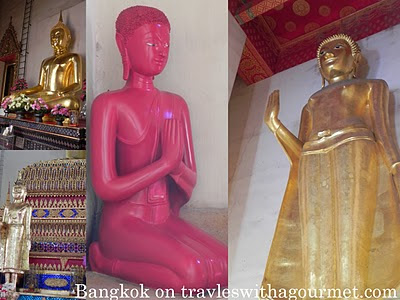 We walked through a small courtyard and saw several white structures topped with pointy roofs.  The entrance to the first one was up a small flight of stairs, at the top of which several shoe sand sandals were placed.  We sat down and removed our shoes (When visiting a temple in Thailand, one has to be dressed appropriately, meaning no shorts or short skirts, no sleeveless or see-through tops and no shoes in order to enter all temples or sacred places.  Travel tip#1 is to wear shoes easy to slip on and off.  I made the mistake of wearing gladiator sandals which had several straps and spent lots of time buckling  and unbuckling those stylish straps). This temple had a small front hall where a seated Buddha was then behind, a larger hall with a standing Buddha and several intricately carved gold wooden shutters.  There were several people praying and an orange-garbed Buddhist monk placing flower offerings and paper requests at the foot of the Buddha. 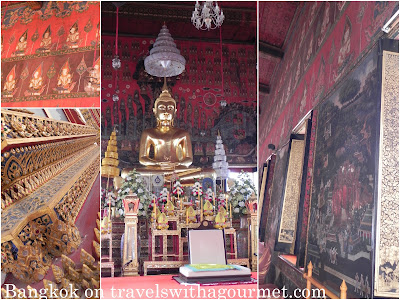 The next-door temple had a larger indoor courtyard where several monks were seated to one side washing metal bowls and had many seated Buddhas lining the three sides of the courtyard.  Through the main entrance was a larger temple whose walls and ceiling were completely painted with murals in red and gold with a seated golden Buddha at the center.  Again, there were several people seated on the ground at prayer so we walked quietly through and just had a look at the detailed murals.
After seeing this temple, the tuktuk driver asked if we would like to see a few shops for jewelry, silks and Thai handicrafts as the Grand Palace was still closed to the public.  Since it was only noon and getting quite hot and humid, we agreed to visit a few shops to kill time before heading back.  This shopping foray took forever as he proceeded to take us to several shops (at least seven), some filled with tourists and some completely empty but all selling the same stuff – jewelry, suits made-to-order, silk material.  As we had no intention to buy anything so at the first few places, we would walk around for a few minutes and leave.  When we asked him to take us back to the Grand Palace, he started to explain that he needed to bring us to all these places so he could get a stamp on this card and get a free full tank of petrol for his tuktuk.  At this point, we were hot, sweaty and grimy from having ridden in this rickshaw through Bangkok traffic for over an hour and insisted that he return to the Grand Palace, which he grudgingly did.  We got there, paid him and jumped out.  That was the first and last time we rode a tuktuk in Bangkok. (Travel tip#2: Get ready for the unexpected.  In this case, we got a fun ride on a tuktuk which was longer than we expected.) 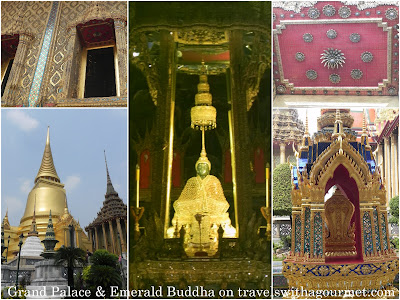 We arrived at the Grand Palace almost at 2:00 p..m. and just didn’t have the energy to go through the whole palace grounds so we went straight to the royal monastery of the Emerald Buddha (Wat Phra Kaew), one of the most holy places in Thailand.  The entry was packed and to get into the main hall there was a constantly moving throng of tourists jostling for a look of the emerald Buddha which is amazingly carved from a single piece of green jade discovered in 1434.  It was initially covered in plaster until an abbot noticed the bit of green, which he though was emerald (hence the name), peeping out from underneath some chipped plaster.  It was worth it to have a peek and since photos aren’t allowed inside, I took one from outside the main window.  After that, we walked through the palace grounds a bit but decided that we would have to come back another time to meander through the 218,000 square meter walled area that makes up the grounds and buildings of the Grand Palace. From there, we took a taxi back to the central business district on Sukhumvit road where our hotel was located for a late lunch at a local cafe nearby.
_______________________
The Grand Palace
Overlooking the Chao Phraya river