We arrived close to midnight on the first of September at Beijing airport.  First impressions were good – the airport was modern and clearing immigration was quick.  We set off for the city, a 45-minute drive to the center where we whizzed through check-in at the Ritz-Carlton Beijing Financial Street and into our Executive Suite for the next 48 hours.  We were pleasantly surprised by the amenities that awaited us – a cheese platter, an ice-cold bottle of Veuve-Clicquot, carafes of fresh orange and grapefruit juices, assorted bottled water, a large fruit bowl, a tray of strawberries, raspberries and blueberries with fresh double cream and bunches of white roses everywhere.  The suite had a separate living and bedroom area with large closets and a white marble bathroom with separate shower and extra-large tub in between.  We had a midnight snack of cheese and berries, unpacked and went straight to bed. 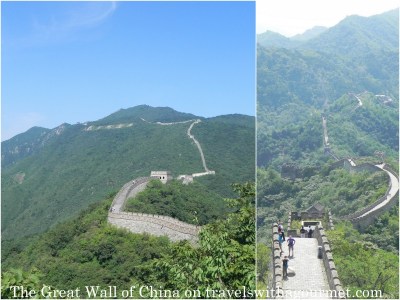 Bright and early on Friday, we had breakfast at the Club lounge then met up with our hired guide for the day, Michael, and with our hired car/driver and set off for 70-kilometer drive to Mutianyu where a section of the Great Wall of China is located.  Luckily, we arrived before noon and although there were already several cars and buses, it wasn’t as full as it usually is.  There are two ways to get up to the Great Wall – hiking or with the cable car and three ways to get back down: hiking, cable car or toboggan.  We opted for the easy cable car both ways so we could maximize our time do more sightseeing in the afternoon.  Our guide bought the tickets and led us to the cable car where the ride up took about five minutes.  It was a beautiful, sunny day and we could see clear across the valley below and the walled mountain pass above us.  This section of the wall has 3 main watchtowers and a seemingly-endless path that goes through the mountains in both directions.  We walked towards the first watchtower and marveled at the sixth century granite-wall construction and the sweeping views afforded by the upper floor.

After about an hour, we took the cable car back down then went to a nearby government-owned cloisonné factory where we were shown the process of enamel decoration from the initial copper vessel to the painting and triple-firing and finally the finishing.  In the same location was a simple country-style restaurant where we had lunch, an uninspiring chicken, pepper and peanut dish, soggy sweet and sour pork, stir-fried water spinach with garlic and steamed rice.  As our first Chinese meal in Beijing, it was disappointing to say the least.  We then had a little nap in the car for the drive back to Beijing and the Forbidden City which was the second part of our sightseeing tour.

Where the Great Wall is impressive and imposing, we found the Forbidden City to be vast but repetitive with the halls starting to look quite similar and the private quarters impossible to view as the glass was grimy and dirty and the displays were unlit from inside.   There were lots of amazing details though – the red gates and gold studs, the gold woodwork and tiles, the red lattice screens and the intricate roof ornaments were an important lesson in Chinese art and design that is still very much in use and fashionable to this day.  By this time, it was late afternoon so we headed back to the hotel through the snarl of Beijing traffic for a short rest before dinner.