I had heard about Antonio’s from many friends and read about the many foodies and blogger’s memorable meals here plus my mom hasn’t stopped raving about Antonio’s ever since they opened in Tagaytay several years ago.  Last year when I was home for a week, she really wanted to take me there for lunch but it just didn’t work out with my schedule.  This time, it was easier as I was home alone without the children so we planned a Saturday post-breakfast drive up to Tagaytay and a lunch at the famous Antonio’s (#11 on this year’s Miele guide Asia’s Top 20).
Early Saturday morning, I met up with my good friend, T, for a quick coffee and cinnamon roll at the nearby Starbuck’s before my mom joined us and the three of us left for Tagaytay, which is over an hour’s drive south from Makati using the speedy Skyway.  On the drive up, we chatted non-stop about life and everything else and before we knew it, we were up in Tagaytay overlooking the picturesque lake and Taal volcano.  We drove a bit further up the main road until we saw a white sign to turn right into a small side road that led us to the wooden gates of Antonio’s garden restaurant.  We were left at the driveway where we were greeted by lovely wooden doors that opened up into an open-air foyer  where the walls were filled with black and white photos and the floor covered in antique black and white patterned tiles.

Down the stairs we went through the outdoor garden area where there are a few tables and into the small indoor dining area which was almost full.  We were seated at one of the tables overlooking the large terrace below where larger communal-style tables (for 8-12) were already filled with families and groups having their lunch.
As soon as we sat down, we were given an appetizer menu of several items and we were all set to choose our meal from this smaller menu when they presented us with the another larger menu where a four-course menu of house salad, soup, main course and dessert is offered with the price determined by your choice of main course.  I had already chosen steak tartar from the appetizer list and I was all set to have it even if I was going to end up having four courses instead of three. They also chose the set lunch menu and each ordered a different salad to start along with a bottle of Chilean Caliterra Reserva Carmenere 2010.  While we waited for our appetizers, we were served warm bread rolls and iced water flavored with lemon, cucumber and mint – a nice touch especially on a warm day.

My steak tartar came first and I was surprised at the portion since it was listed as an appetizer but I guess most order this to share.  There was a mound of hand-chopped steak with the usual stuff mixed in (capers, pickles, Worcestershire sauce, Tabasco, onions, raw egg), topped with some baby watercress and served with lots of toasted baguette slices.  It was as delicious as I had heard, perfectly seasoned and slightly spicy, just the way I like it.  My mom and T don’t usually eat steak tartar but this version was so good that I managed to convince them both to have a tiny mouthful just to try it.  The cold steak, crunch toast and the velvety Carmenere were perfect together and despite the large portion, I ate it all.
Next came our salads (most of their greens come from their farm located on the property):  my mom’s foie gras tempura was an interesting version of alternating slices of apple and foie gras covered in a tempura batter and deep-fried – crunchy on the outside, meltingly rich hot foie gras and crisp sweet apples on the inside.  T’s salad was the classic pan-seared foie gras with pear and arugula and mine was the arugula salad with Gorgonzola, glazed walnuts and sweet sun-dried tomatoes.  We were slowing down our meal at this point to enjoy the wine and the slowly emptying dining room.  By the time our soup was served – tomato bisque with a creme fraiche foam – there was just another table lingering over desserts and us still with our main courses and desserts to come.
For our main courses, we each had something different from the many choices on the menu.  My mom chose the rack of lamb, T chose the sea bass and I chose the seafood risotto.  The rack of lamb was a good portion of three chops with jus, thin green beans and tomato risotto.  T’s sea bass was on top of crushed potatoes and came with thin green beans and cherry tomatoes.  My seafood risotto was a tomato-based rice with seared scallops, mussels, prawns and salmon – the rice was a bit too soupy to be called a risotto but it was delicious nonetheless.
We had cleared all our main courses so instead of having three desserts, we decided to share two instead: the dark chocolate souffle and the chocolate orange.  As we finished the last of the wine and waited for the souffle, we realized we it was already almost 4:00 p.m.  The dark chocolate souffle was served with a cardamom-flavored creme anglaise which for me was too strong in flavor to complement the warm chocolate.  The mandarin orange which I wrongly assumed would be the traditional orange peels covered in dark chocolate were actually two scoops of mandarin sorbet covered in chocolate.  They were okay but fiddly to eat even if we used our hands as suggested since the chocolate ice cream balls were too big to pop in our mouths in one go.  Espressos ended our gourmet meal.  As we finished our long, leisurely lunch, the staff had started to set up for dinner and we reluctantly gave up our table for the drive back home. Now I know why everyone who’s been raves about Antonio’s.  I will certainly be back to try their grill and their breakfast on my next Manila visit. 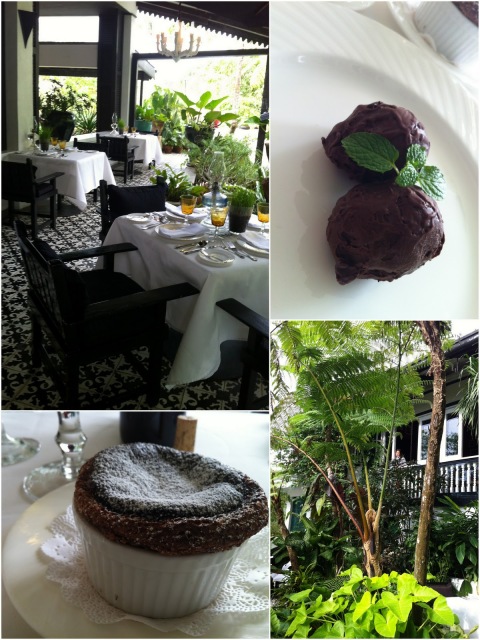 Breakfast at Antonio’s
*Open Tuesdays to Sundays from 7 a.m. to 4 p.m.  No reservations taken except for private events.
Also at the same location below the main restaurant in a casual family setting at more reasonable prices.
Here, an all-day breakfast menu is served along with a simple menu of salads, house specials, grazing plates, pastas, pizzas, crepes and even a kid’s menu.


The Grill by Antonio’s
*Open 7 days a week for lunch and dinner from 11 a.m. to 9 p.m.
Reservations only on weekdays or private events
Favorite Filipino dishes and grilled items are served here in a casual setting.