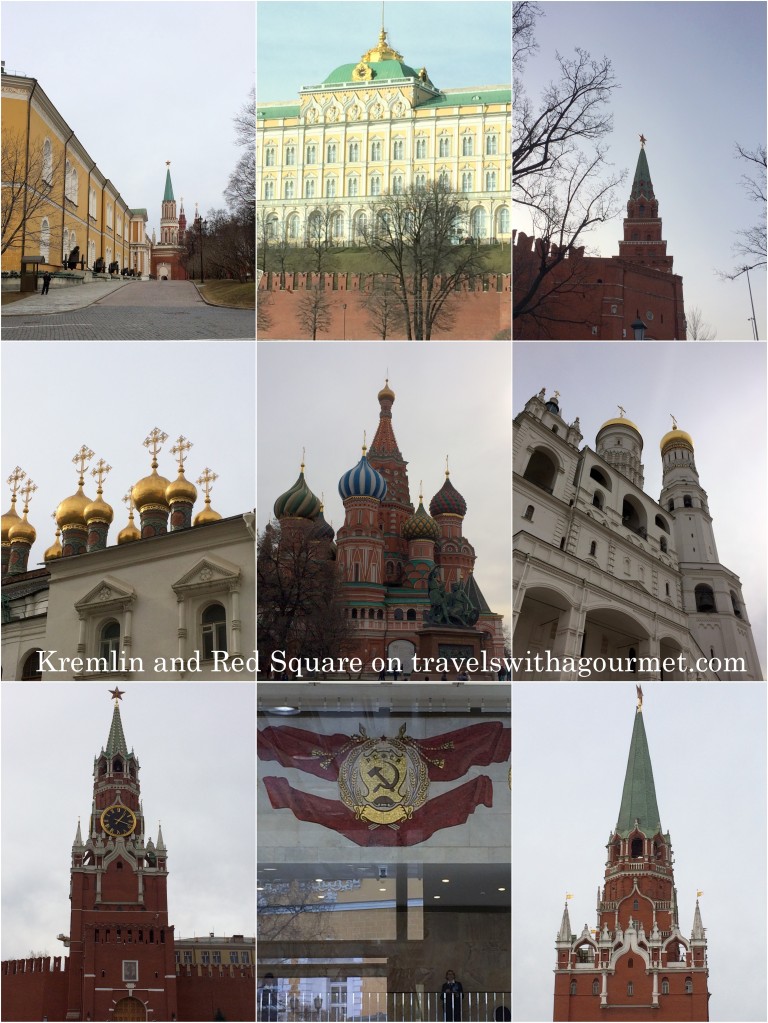 The Kremlin is the center of it all. Recently, they implemented an online system for buying tickets and it’s first weekend trial was when we there but we did it the old way – get in line and try and snag a ticket as the entries are limited and scheduled. You can do full-priced ticket which includes the Armory museum, the three cathedrals (Annunciation, Assumption and Archangels), Ivan the great’s bell tower, the Patriarch’s Palace or opt for several cheaper ticket options which is just for the grounds and Cathedral square usually bought by Russians or locals who like to walk around the Kremlin drink the weekends. The ticket for the diamond exhibit, which is also in the Armory, is sold separately inside the museum. Be patient as the ticket seller is a babushka who hardly speaks English and there are hardly any signs in English so use sign language and figure it out. My rusty Russian helped a bit but not much. Ticket booths open at 9:30 for the first entry at 10:00. Once you have your ticket, get in the long line and wait until the Kremlin gates open – this took about 45 minutes to an hour. Once inside, head straight to the armory which is filled with Russian state regalia, ceremonial vestments and crowns and all the precious metals from jeweled crowns to state silver service which should take about an hour. After that, we walked out towards Cathedral square which gives one a 360 degree view of the three cathedrals and Ivan the great’s bell tower. After a short wander around, we exited towards Manezhnaya Ploshad (Manezh square) to the cobblestoned red square and walked towards the Kremlin clock tower and the iconic St. Basil’s cathedral.

It was about time for lunch so after a short tour of red square, we escaped the cold (3C) and entered GUM – the State department store, now fully renovated and filled with high-end boutiques. When I left in 1997, GUM was just starting to be renovated and was still a mix of Benetton (one of the first Western labels present in Russia) and Russian style shops. Now, it’s a bright, modern shopping mall housed in an architectural marvel from the 1890’s filled with upwardly mobile Russians and a few tourists. We went up to the second floor where we got in another line (remnants of Communist times) to have lunch at Stolovaya No.57 – a retro Russian-style self-serve cafeteria complete with white lab coat uniformed counter staff dishing out potato salad and smoked fish, borscht and chicken Kiev, pierogi and black bread. Even the drinks are authentic – from an ice-cold piva (beer) to a kitschy vending machine dispensing super fizzy Russian sparkling water by the glass. I had the classic chicken Kiev with mashed potatoes while A had a slab of roast pork with cranberry sauce and a beet and smoked fish salad.

From there, we continued our walk around the center and headed towards Tversakaya street, known by its’ former name as Gorky street. Just like GUM, this busy street is now home to luxury hotels and shops but still retains something of the old Moscow. We visited Yeliseyevsky Gastronom (Yeliseyevsky food store) which used to allow access only to Communist party elite. This food hall was always a gastronomic mecca but more so today that the shelves are filled to the brim with everything from fresh raspberries to French lentils as well as a large glass case stacked with tins and tins of edible black pearls, caviar.

Another day should be devoted to the Pushkin museum – housed in three buildings – the main one on (Volkhonka street 12) in the center for ancient artifacts, sculpture and 18th century European art, the smaller one on the right (Volkhonka street 10) for private collections and the adjacent one on the left (Volkhonka street 14) for 19th and 20th century art. We visited the main building on one day and I returned another day with N to visit the Impressionists which was a visual pleasure – rooms and rooms of Monets, Renoirs, Pissarros, Degas, Gaugins and Van Goghs.

Just in front is the gigantic gold-domed Christ the Saviour cathedral, reconstructed in the late nineties then continue onwards to the pedestrian bridge to cross the Moscow river to the other embankment and walk around what used to be the Krasny Oktyabr (Red October) Chocolate Factory – converted into an urban center with cafes and restaurants, design offices and the Lumiere Brothers Photo gallery showcasing Soviet-era photographs with a cafe and an interesting gift shop, sorely lacking at the Pushkin museum and the Kremlin.

Last but not least the Bolshoi is essential, preferably to watch a ballet in the historical stage or an opera at the new stage or at the very least a tour. After a six year renovation, the theater which opened in 1856 has retained the gold rococo interiors and red velvet seats but the sound system and acoustics have been updated. We were able to get tickets for the premier of Alexandre Dumas’ La Dame aux Camellias – a ballet in three acts on the historical stage. The experience of an evening at the Bolshoi should not be missed and was the best way to spend our last evening in Moscow.