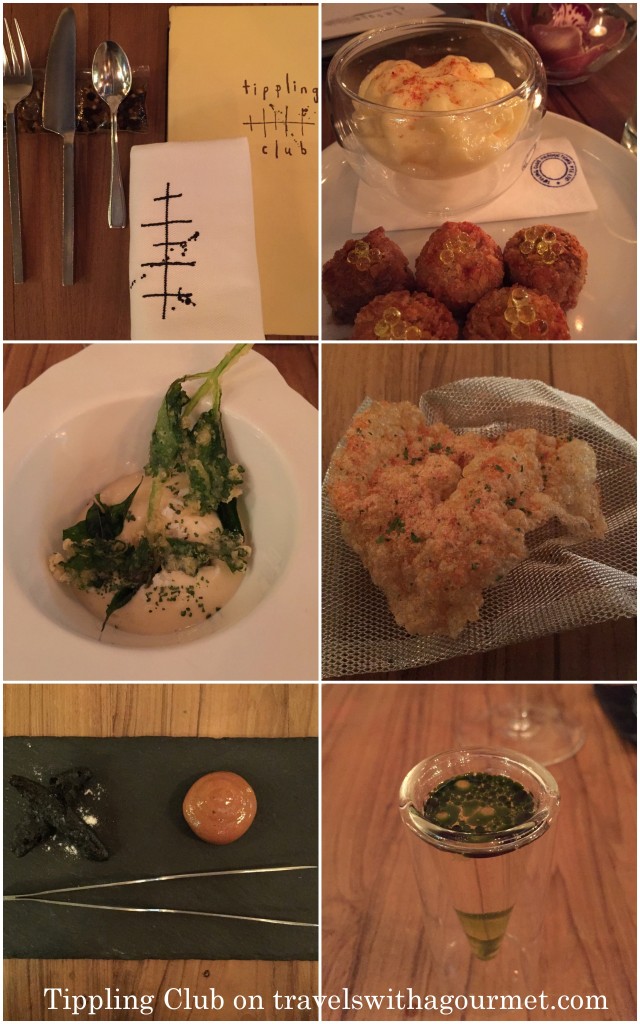 No better place to kickstart my blog than a meal at the Tippling Club – one of Singapore’s best restaurants where Chef Ryan Clift has been impressing diners with his inventive cuisine since he opened his counter restaurant in Dempsey in 2009.  I had been once to Tippling Club in July 2011 and heard that since then, they had moved to a brand new location near Chinatown in late 2013.  Located in three adjacent shophouses in the bustling restaurant street of Tanjong Pagar, Tippling Club’s new interiors are a unique mix of old and new – antique Peranakan floor tiles in the bar area and glossy green subway tiles in the large show kitchen, upcycled wooden planks for the ceiling, recycled timber for the floor, vintage lamps for the kitchen counter and a mix and match of lighting fixtures for the main dining area but keeping to the overall green color scheme.  The usual creative cocktails are still present along with a concise bar snacks menu of modern tapas, and there is now a monthly prix-fixe lunch menu (Two course at SGD$43++ or three courses SGD$58++) along with the usual dinner tasting menus (5-course Classic SGD$160++ or SGD$260++ with wine pairing, 10-course Gourmand SGD$265++ or SGD$420++ with wine pairing and an equivalent Classic and Gourmand vegetarian menu).  I went back recently for lunch and was impressed with the changes to the menu – less of the tiny plate molecular gastronomy stuff that used to be served to a more approachable version of modern cuisine – which made me decide to book a table for dinner two weeks later.

A and I arrived a bit early for our 8:30 p.m. reservation during the long weekend of jubilee celebrations for Singapore’s 50th birthday and had time to look carefully through the menu while waiting for our friends to arrive.  We decided to order the chive croquettes from their bar menu which arrived soon after our friends were seated – five piping hot croquettes topped with roe and accompanied by a warm Parmesan foam dip.  We all opted for the five-course classic tasting menu and aside from one substitution for the appetizer, we were all ready for our degustation dinner which we were going to have with a bottle of Venta Las Vacas 2012 Ribera del Duero.

First up were the snacks, small plates of culinary inventions that has made Tippling Club famous.  We started with a dollop of warm tom yum flavored cream with basil tempura followed by the beef tendon cracker dusted with a tomato powder which was like airy pork crackling that tasted of a cheese-less pizza Margherita.  The third snack was their signature charred peppers and soy miso dip served on a slate with some large tweezers (I remember this one from 2011) and the final snack was their tomato lava lamp – a shot glass where oil and vinegar flavored tomato water is poured so that bubbles float up to the surface and make it look like a tiny lava lamp.  It was an entertaining and fun start to our meal which gave us a little taste of what they had in store. 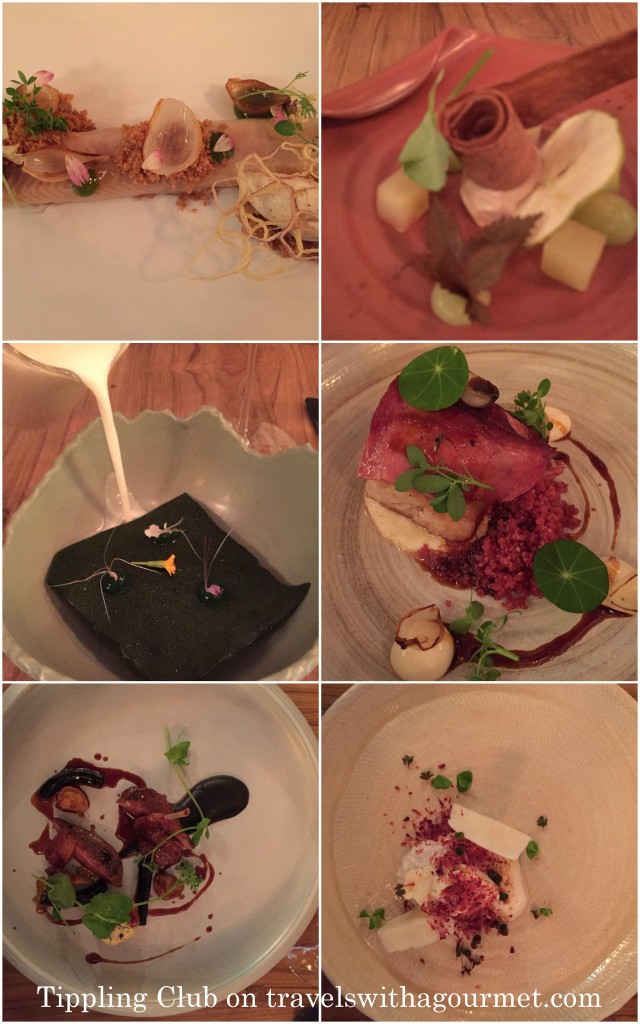 The cold appetizer of eel, charred shallot, mustard ice cream seemed so straightforward after the molecular snacks but the flavors were very well-executed – jellied eel contrasted with the pickled pearl onions, crumbs, crisp shallot and mustard ice cream.  A opted for the foie gras instead of the eel and was presented with a dollop of hummus-like foie gras with cubes of apples, green grapes and an oven-dried apple chip.  A warm appetizer of scallops came next hidden underneath a black pasta sheet onto which creamy purple garlic soup was poured which almost dissolved the ravioli-like squid ink pasta and mixed in with the parsley root and almost raw paper-thin scallop layers.  Two main courses followed:  roast rockling fish on a bed of shaved beetroot topped with alternating thin slices of smoked ox tongue and fresh beet root, the tongue tasted like corned beef while the beets were sweet and went well with what would have a bland chunk of fish without the interesting ingredients added on; the meat course was a roast pigeon breast, confit of pigeon leg, cep puree, truffle macaroni and a truffle infused sauce Perigourdine.  There was an optional cheese course (for an extra SGD$20) which we would have ordered if we had more time but since A was leaving very late that evening for the Virtuoso Travel week in Las Vegas, we went straight to dessert – textured milk which was a dollop coconut milk tapioca, topped with frozen yoghurt and crunchy milk-flavored meringue – a light palate end to our decadent meal.  Last but not least was their tray of signature mignardises which accompanied the coffee.

Service throughout was courteous, friendly and unobtrusive and the added touch of having different chefs come out to explain each of the courses as they were served, made the meal more interesting.  Tippling Club obviously isn’t a bargain but with the quality of the produce, the innovative cuisine and the good-sized portions, it’s a dinner worth saving up for.  In any case, there’s always the equally good set lunch menu if you’d like to give it a try (photos of my recent lunch below).

Bar is open Mondays to Fridays from noon to midnight and on Saturdays from 6 p.m. to midnight