On the last week of August, three girl friends and I went to Puerto Banus before they all headed back home (R & V to Paris and T back to Madrid). I promised to take them to my new favorite boutique – Uterque (part of the Grupo Inditex brands which also own Zara). We ended up trying most everything in the store to the point that the Uterque image manager who was at the boutique setting up the window display, started to bring out stuff for us to try. Good that he did because we left with several items each and had lots of fun as well. After our shopping spree, we met up with A for dinner at the brand-new week-old tapas bar right in front of El Corte Ingles (where the office of Andalusian dream homes used to be).

La Moraga Iberica is Michelin-starred chef Dani Garcia’s newest concept and a more modern version of his other tapas bar in Malaga, La Moraga. I had seen the space being kitted out for it’s reincarnation from real estate office to funky restaurant and was eager to try it after several delicious meals at La Moraga.
The all-white interiors are sleek with a very low, wide bar in front of the show kitchen and grill. Several tables line the windows overlooking the street while each side of the restaurant is devoted to a display: one of wines and the other of Jamon Bellota (ham from acorn-fed black-hoofed pigs). On each end of the bar are large sunken buckets filled with several bottles of Cava and Champagne filled with dry ice which makes for a very interesting and smoky display.
The menu is very similar to the one in Malaga with tapas listed as hot or cold, a few salads, a few small main courses and a large selection of ham, chorizo and other cold cuts, all of which are from the famous black pigs that produce Spain’s world-class ham. 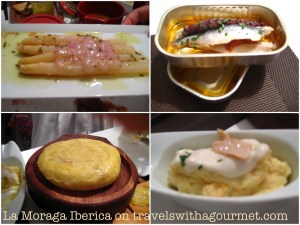 Since we were starving, we started to order a whole selection of dishes (about 10 in total) with a few glasses of ice-cold Cava and some tinto de verano (a sort of sangria made from white wine, fruits and fizzy water). The plates started to come fast and furious, one after another, and our little table started to fill up very quickly. It got to the point where there wasn’t any more space for any dishes and the server grudgingly stated that the food comes out of the kitchen quickly which is why we ask clients to order their dishes one by one. Well, we obviously didn’t get that memo. Besides, this is supposed to be a tapas bar, and tapas usually come in small plates so I guess they need to sort out that part of their service sequence.
The food though was delicious and different – fresh white asparagus draped with several sashimi-style slices of hake, goat’s cheese and olive oil mixed and served in a jar to be spread on melba toast, hand-chopped steak tartar also served with melba toast, little sandwiches of crushed chorizo on mollete (Andalusian soft white bread rolls), a salad of langoustine tempura with baby greens. Classics were given a twist – boquerones al vinagre (unsalted anchovies in vinegar) were served with roasted red peppers and a bit of tapenade in an open sardine tin, ensalada Rusa (Russian-style salad) was a chunky potato and tuna mix that wasn’t overpowered by mayonnaise as it usually is and of course the infamous tortilla de patata (potato omelet) was smaller and perfectly-formed although the insides were a delicious gooey diced potato mess. There were also a few small main-course style dishes like the secreto Iberico (Iberian pork) pan-fried and with chunks of chorizo Iberico and what seemed like sweet potato, and the cocotte of beef cheeks cooked until meltingly-soft which came with a rich gravy and extra-smooth mashed potatoes.
We finished off our multi-course tapas dinner with two desserts to share among the five of us: the dark chocolate and bourbon pudding and the lemon cream dessert – both of which were gobbled up in about a minute. It was close to midnight when we finished yet the place still had a few tables getting ready to order.
The last hiccup of the evening was when we asked for the bill to be split evenly among the five of us and cashier came over with the machine and grumbled that we were making her job very, very difficult which shocked us into silence. La Moraga Iberica shows a lot of promise and it’s great that they’ve got the food right, they just need to work on their service and remember that the customer is almost always right.
_________________________
La Moraga Iberica
Calle Ramon Areces, 1
29660 Puerto Banus, Marbella
(right across the street from El Corte Ingles)
+34 952 817 448
* No reservations taken at the moment but a table is normally ready in about 20 minutes. Have a drink and enjoy the scene.
* Fantastic outdoor seating (not yet open when we went).