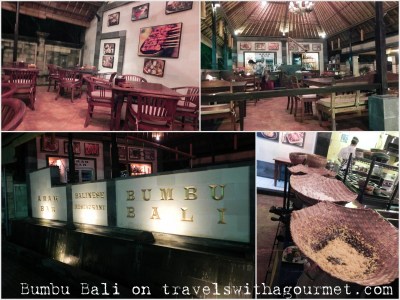 The first time I went to Bali was in January 1999 when my then boyfriend (now husband) A and I went on our first mini-break together.  We spent a week at the Grand Hyatt and on one of those evenings, we had dinner at what was then, one of Bali’s newest concept restaurants – Bumbu Bali.  We decided to go back to Bumbu Bali and see what has changed in the last decade. First of all, there are now two Bumbu Bali restaurants, both on Tanjung Benoa in Nusa Dua.  After finding out that both places served the same menu, we opted to go to the newer, smaller and more casual Bumbu Bali 2 further down the road from the original one we went to many years ago as the original Bumbu Bali had a cultural performance that evening and we wanted to have a quiet dinner.
Upon entering, we were welcomed with a frangipani which was placed behind the ear (just like in 1999), and then led past an open Balinese-style kitchen (just like the original Bumbu Bali) to a table towards the back.  The restaurant is open-air and separated into several pavillions – the front area is where the arak bar is and the two seating areas at the rear are past the open kitchen and where more tables are set.
Our last dinner here was a gargantuan feast as we had ordered the traditional Balinese Rijstaffel menu (225,000 Rupiah, approximately US$22.50) which is a set menu of three starters and a soup followed by seven (you read it right) small main dishes, vegetables, three types of rice, four desserts and finally, Balinese coffee or tea.  We even have a photo taken pre and post-Rijstaffel (rice table) that showed how stuffed we were from that multi-course dinner.  A rijstaffel is where several traditional Balinese dishes are all placed at the table along with a basket of steamed rice and everyone shares the food that is served.
This time around, we were more prudent and considerably less hungry so we ordered a Sate lilit (minced seafood satay) to start followed by two dishes to share: Sambel Udang (prawns with chili and lime in coconut sauce) and Kenus Mebase Bali (braised squid with lime, lemon and basil). They brought us a basket of krupuk (prawn crackers) and a tiny dish of sambal, the ubiquitous Indonesian chili and garlic sauce. On the same basket were several large red chilis (which were for decoration only so don’t make the mistake of popping one in your mouth). 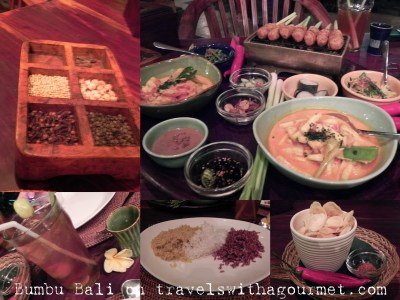 The food was served soon after in one large round tray filled with the three dishes we ordered along with some pickled cucumbers and carrots, green beans with grated coconut, tiny rice cakes, peanut sauce,chili kecap manis (sweet soy sauce) and crispy garlic with chili.  We were also served three types of rice – white (steamed), yellow (turmeric-flavoured) and red (like brown rice).  The seafood satay was like a tiny kebab but instead of being smashed onto a metal skewer, the seafood is pressed around a stalk of lemongrass before grilling then served on top of a tiny hibachi-style grill filled with charcoal.  It was infused with lemongrass and spices and was good although lukewarm even if it was on that mini-grill.  The prawn curry was okay although it got spicier with every bite and the squid which was supposed to be lime,lemon and basil infused just tasted like the coconut curry sauce the prawns came in although flavoured with less chili and more lemon/lime.  Was the food as good as we remembered? No.  Perhaps the flush of new romance clouded our judgement then or maybe, over the years, Bumbu Bali just hasn’t evolved with the times. It’s a good place to take the first-time Bali visitor though to have a taste of traditional Balinese cuisine in a pleasant setting.
Eleven years, two children and seven countries later, we’re back in Bali, this time for a new posting and a chance to experience island life.  We’ll probably go back to Bumbu Bali with the kids, to let them have a taste of the Balinese Rijstaffel and to tell them all about our special dinner many years ago, so they too can be part of the memory.
____________________________________________
Bumbu Bali
Jl. Pratama – Tanjung Benoa

In Bumbu Bali 1, cultural performance every Wednesday and Friday at 8:00 p.m.